All you need to taste and assess olive oil is your own sense of taste and smell – plus a little practice.  After all, everyone who enjoys eating and drinking is unconsciously assessing everyday flavours and building up a taste memory which they rely upon to make choices in the future.

When it comes to olive oil it is not always easy to decide if a particular oil will taste good or bad; if it will appeal to your taste or if it will match the other ingredients in the dish you are planning to make. Tasting is the only answer. 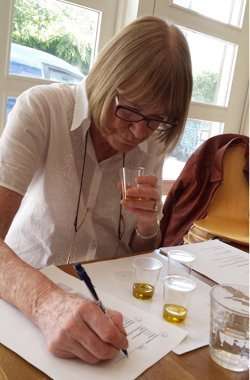 Start your tasting session by swirling the oil in a glass to release the aromas.  Next sniff the oil. Faults should show up at this stage.  If you are happy that the oil smells good sniff again and write a note about the aromas.  Now place some of the oil in your mouth, drawing in a little air through your teeth at the same time.  This helps to release more of the flavours and is similar to the method used for tasting wine.   Write another note about the first flavour impressions and their intensities. Finally, the oil should be swallowed to assess the full impact of any pepper.  This is the time to think about the length and description of the after taste left in the mouth at the end.

So what are you actually looking for during this process?  There are three basic attributes of extra virgin olive oil which need to be assessed at each stage of the tasting and balance and intensity of these is very important.  These are:

This is the most important characteristic of extra virgin olive oil.  It refers to all the aromas and flavours in the oil which can be described as reminiscent of other things.  This is where your taste memory comes into play as many of these aromas are evocative of other foods such as apples, citrus fruits, salad leaves or culinary herbs but they may also conjure up memories of aromas like cut grass, wet hedgerows, autumn woods or rolled tobacco.   The more complex the tastes and flavours the better the oil A lack of fruit is indicative of a poor or faulty oil.

This is perceived by the taste buds on the tongue.  It is often slow to develop.  It is somewhat reminiscent of tannin in wine, black tea or almond skins. Bitterness is not an essential characteristic of olive oil.  Some oils have very little or no bitterness and this is not a fault. A point to remember is that a few people are “bitter blind” and have difficulty in differentiating bitter tastes.

This is perceived in the mouth and is reminiscent of ginger, chilli or curry. It tends to come towards the end of the tasting experience and may only be fully stimulated on swallowing.  Its intensity may increase and linger or it may disappear quite quickly. Pepper is not an essential characteristic of olive oil and lack of it is not a fault.  Some tasters tend to confuse bitterness with pepper. A useful way to start differentiating between bitterness and pepper is to think of rocket which is slightly peppery but mainly bitter and watercress which is also bitter but much more peppery.

The tasting experience should take in the aroma of the oil, its initial attack on the palate following through to impressions on swallowing and the taste left in the mouth afterwards.
Use your notes to make an assessment of the quality, style and character of the oil.

The first assessment must be to determine if the oil is faulty or not. Rancidity is the most common fault in oil. A rancid oil usually has a stale smell of old nuts which is unmistakable. There are other faults which also smell unpleasant. However, if the oil smells fresh and zingy in character it probably is.

To assess the style and character of the oil look at the descriptions you have used in your notes. Is it predominantly vegetal or herbaceous in character or is it more nutty with bitter tones. Are there some fruity fruit flavours. How peppery is it? The answers to these questions will help you to determine if the oil is to your taste and also how you might use the oil in your kitchen.

A point worth mentioning is that when olive oil is tasted for official grading the oil is placed in blue or bronze glasses so that any preconceived ideas that the taster may have about the colour of an oil and what it might indicate are removed.  There is a general misconception that colour gives some pointers to the taste and quality of an oil.  For example, a deep green colour is thought to indicate an oil that has a strong “green” flavour with a good deal of bitterness and pepper.  However, this just not so; some varieties simply contain much more chlorophyll than others..

Conversely, very golden oils are often thought to be likely to be lacking in punch and flavour.  In fact, some of these oils have very complex albeit gentle flavours and some pack a real peppery punch.

Tasting can also be affected by the tasters’ attitude to filtered and unfiltered oil.  The latter has a much more viscous or velvety mouth feel to it. This has no bearing on the quality of the oil but it will make a difference to its appearance.  It can also make a difference to its shelf life.  Unfiltered oils contain more tiny particles of olive vegetal matter which may cause the oil to deteriorate more quickly than a clear oil. 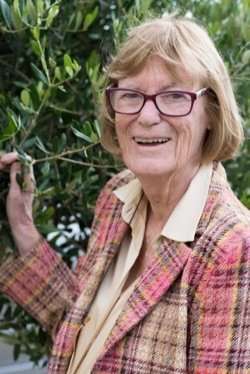 Check out Judy’s website www.oliveoil.org.uk or click on the images to see more about Judy and her work as well as her range of books including: 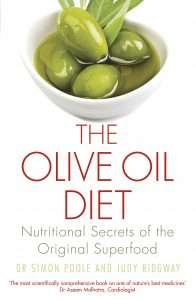 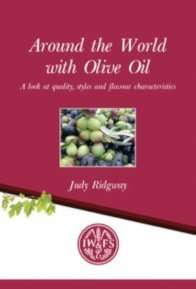 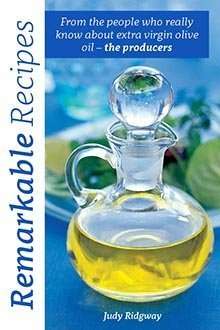